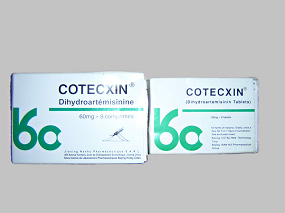 Counterfeit antimalarials found in Tanzania and Kenya throughout 2006 and 2007: Counterfeit version of Cotecxin (right) and genuine medicine (left). The counterfeit pills neither contained dihydroartemisinine as claimed on the label nor any other effective antimalarial agent. Genuine Cotecxin is used to treat acute malaria only. When taking fake versions without active ingredient, death comes within a few days. From the same company, counterfeit versions of the appropriate fixed-dosed combination product consisting of dihydroartemisinine und piperaquine emerged in Kenya more or less simultaneously. Again, none of the pills contained any active ingredient and for malaria patients treated with the counterfeit product death will be immanent. For further reading see also the report on counterfeit artesunate published in PLoS Medicine.